That same sweet country store would help launch a national championship skier and see five local boys barefoot side by side.  It would host families fishing, camping, and renting a beautiful handmade boat for a dollar a day.   The heart of this place though goes much deeper than the stories we will share, and it dates back to 1939 before “…the lake backed up.”

That’s when the Saluda River was flowing south towards what would come to be known as Buzzards Roost Dam. 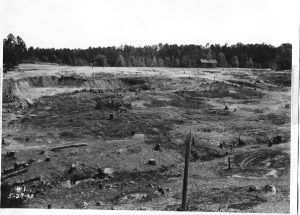 Greenwood County Sherriff Cal White mentioned to his friend that they were fixing up a lake and he ought to buy some land on what would be the shore.   Talk about vision, that’s exactly what James Thomas “Sambo” Irvine did.  He and his bride took five dollars out of their Mathews Mill paychecks every week, until they had paid off the $50 they owed for a large spread of waterfront.

It all started with fish frys for friends at the mill.  There would be a shed erected to host chicken and fish stews.  Friends thought Sambo ought to start selling crackers and candy, and so he did.  The cedar posts that were the foundation of the store are still erect on a granddaughter’s lot. 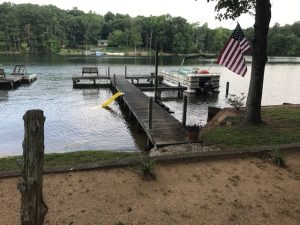 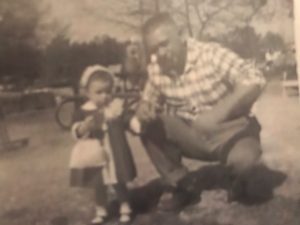 “Grandpa was always there if somebody needed help.  He would tow your boat in, or I remember this girl came in crying and hollering with a fishhook in her foot.   It had gone all the way through, and she didn’t want to go to the hospital.

He said, ‘I can get it out, but it’s gonna hurt now.’   She asked him to go ahead.  He clipped it and just pulled it out. “ Rains saw a lot.  She saw hard work.  She witnessed character.  Her favorite memory; “…To me, it was how my grandparents treated people.”

It was both Mary Ruth and “Sambo” Irvine who created such a great family environment.   Joyce Rains remembers both of them working hard until her Mom suffered at stroke at the age of 38.  Sambo became her caregiver at that point, and she thrived under his care until she was 82 years old.   He survived her, living to 88.

In this picture, Joyce is on the left of her father.  Her sister Janie Wheless is on his right. 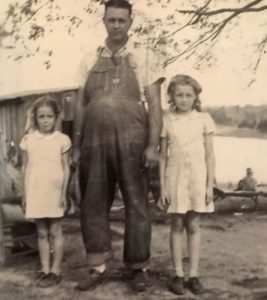 Sambo’s girls would see their father build 74 boats.  This picture shows them in a gorgeous wooden creation, huddled alongside their cousins.  It seems the man could do anything he set his mind to do, including molding young men. 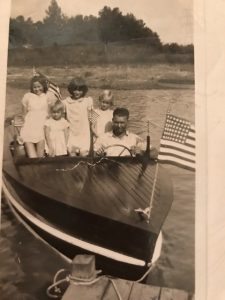 “Teenagers could talk to my Dad.  They respected him.”  Joyce has laughter in her eyes remembering that he also gave those boys a rough time about their girlfriends, chiding them to keep some distance between them.

“My grandparents NEVER allowed alcohol, and to this day, on my lot, I don’t allow it.  It’s out of respect for my grandfather and grandmother.”  Wanda is testament to the will and wisdom of her ancestors.  It was a greater time around Lake Greenwood, when customers could come in and say, “Just charge it.”  Sambo had a ledger. 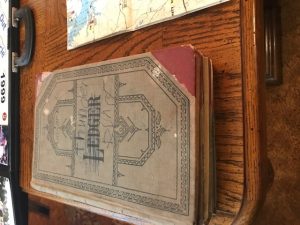 No worries either for the folks who pumped their gas and tried to use a credit card.  Those were never accepted at Irvine’s Fish Camp, but your honor was expected.   Folks were allowed to keep their dignity and return when they had cash.

It always worked out.   Sometimes when you expect the best from folks, you get it.

You might recognize names of some of the regulars.   Grant Blair was such a regular that he just learned to help himself.  Mark Garber, who now lives in Belle Rive, did the same.

Jeff Rodgers would go on to become a World Champion Skier.  Back in his younger days, he would ski barefoot beside John Rodgers, Kellar Lawrence, Roland Snelling and Mark Moore.  Most of them are still skiing today.  It’s just the falls that have changed! 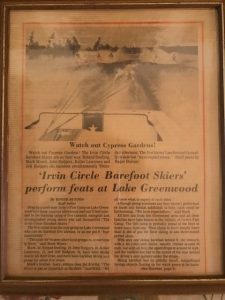 Poke around Irvine’s Circle and you can still symbols of that wonderful chapter of life on our lake.  The Fish Camp officially closed in 2008.  Soon, Greenwood will erect a historical sign on Wanda’s lot so you can see exactly where the stew shed stood.   The old floating dock is still at the end of a pier; and the memories linger all around the land. 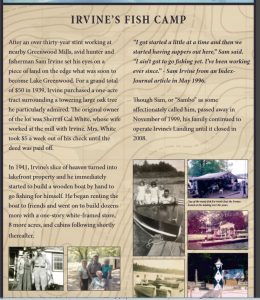 A fisherman by the name of Charles Crawford befriended Sambo over the years, and wanted to find a way to honor the man who meant so much to so many.  He erected this lighthouse in his memory.  Like the man, it’s made of steel. 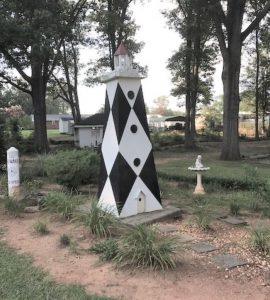 Next CLG Newsletter, Sambo’s grandson Greg Rains, used to find beautiful arrowheads just at the end of their property.  It’s believed Indians had a workshop there.  Lake Greenwood has a long history with folks collecting arrowheads.  We will dig in!

Water Quality – Fishing
Of course having quality water here is important for so many reasons.  We are the drinking water supply for Greenwood, and soon to be for Laurens as well.  Those of us sharing the waterfront dream here can help in so many ways:  – Seriously don’t litter.  Chip bags, soda cans and those others…belong in YOUR garbage.
Preserving Lake Greenwood also suggests the following:
*Have your septic tank inspected every two years and pumped out when necessary.
*This fall puhleez compost your leaves and don’t blow them in the lake.
*Don’t mow near the water.   Keep a buffer and use native vegetation.
*Pay attention and report problems to Lake Management:  864-942-8560
*Don’t feed the waterfowl.
*Scoop the poop in your yard regularly so there’s no runoff into the lake.
*Avoid the use of fertilizers, pesticides, and other chemicals as much as possible.
For more information on how to help, visit www.preservinglakegreenwood.org
Page load link
Go to Top